Thinking Beyond the Past and Future: The Methods of Jesus and the Buddha as a Catalyst for Healing the World

Buddhist monk and mystic Bushi Yamato Damashii returns to the Wild Goose Festival to share a talk entitled “”Thinking Beyond the Past and Future: The Methods of Jesus and the Buddha as a Catalyst for Healing the World.”” “”The Buddha and the Christ were simply aware of their connection to all things and to all people. This awareness (‘Sati’ in Sanskrit), allowed them to connect in real-time to the suffering of their age, and without this awareness our best efforts are weak,”” says Bushi. Sharing the simple methods of generosity, kindness, tolerance, and appreciation, Bushi seeks to enliven, encourage, and reclaim the mindset of two of history’s most revered spiritual figures as a means of healing for the world. 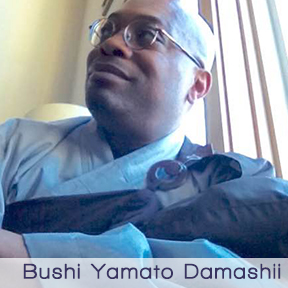 Bushi is a Buddhist monk and lead resident teacher at Daishin Zen Buddhist Temple in Thomasville, North Carolina. Bushi is also the Vice-president and Zen monk at Still Water Farms Retreat Center in Franklinville, NC. A former Christian minister and pastor, Bushi now speaks of much deeper understanding of the love and compassion of the Historical Jesus and the Historical Buddha. Bushi is classically trained in Mahayana Buddhism and Daishin Zen. Bushi is a native of West Palm Beach, Florida and educated abroad. He is a graduate of Myoshin-Ji Daishin Monastery in Kyoto, Japan and completed his 3-Year Retreat Residency Program at Daishin Zen Buddhist Temple in North Carolina. In his previous life he earned several degrees including a Master of Sacred Theology degree and a Doctor of Philosophy (D.Phil.) from the University of Brighton, and postdoctoral studies at Harvard University. Also, a master martial artist, Bushi has black belts (Dans) in three Japanese originated arts: Aikido, Daito Ryu Aikijujitsu, and Iai (sword mastery). Bushi incorporates his mastery of these arts into his teaching of developing clarity of mind and balance when teaching mindfulness. He is married the Christine LeGrand Ramsey, and they have three sons: Aaron, Torrence, and Isaiah.