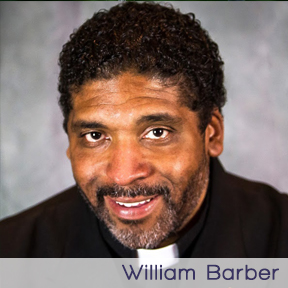 The Rev. Dr. William J. Barber II is Pastor of Greenleaf Christian Church in Goldsboro, NC and architect of the Forward Together Moral Movement that gained national acclaim with its Moral Monday protests at the North Carolina General Assembly in 2013.
He has keynoted hundreds of national and state conferences, including the 2016 Democratic National Convention, and has spoken to a wide variety of audiences across the country
Dr. Barber has served as president of the NC NAACP, since 2006 and sits on its National Board of Directors. He is currently Visiting Professor of Public Theology and Activism at Union Theological Seminary New York and is a Senior Fellow at Auburn Seminary. Dr. Barber is regularly featured in major national media outlets and is the 2015 recipient of the Puffin Award and the Franklin D. Roosevelt Four Freedoms Award. His two most recent books include Forward Together (Chalice Press) and The Third Reconstruction (Beacon Press).