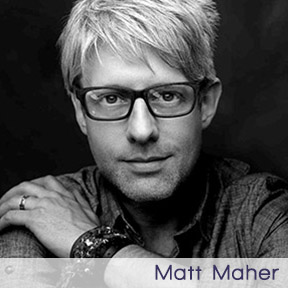 Matt Maher
Matt Maher is a Grammy nominated musician whose latest release, Saints and Sinners is a call for social justice rooted in the work of historic faith leaders such as Archbishop Oscar Romero, Martin Luther King Jr., St. Therese of Lisieux, and Mother Teresa, joins the 2016 Wild Goose opening night experience!  Since his 2008 major label debut, Maher has become a staple in the artistic and songwriting community. A five time-GRAMMY® nominee, he has garnered multiple radio successes writing and recording songs like “Lord, I Need You,” “Hold Us Together,” “Christ Is Risen,” “All The People Said Amen” and “Your Grace Is Enough.” Maher has penned songs recorded by Chris Tomlin, Crowder, Third Day, Matt Redman, Hillsong, Passion and Meredith Andrews, among others. Maher continues to perform and speak as a part of global high-profile events, including the upcoming World Meeting of Families, marking Pope Francis’ first visit to the US this year. In 2013, Maher performed on stage with Pope Francis in front of more than 3 million people at World Youth Day in Rio de Janeiro. Maher and his team are already in the planning stages of participating in World Youth Day 2016 taking place in the summer of 2016 in Krakow, Poland.