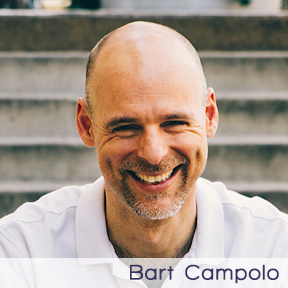 Bart Campolo is an openly secular minister, speaker, and writer who currently volunteers as the Humanist Chaplain at the University of Southern California. Born and raised in suburban Philadelphia, Bart became an evangelical Christian as a teenager and was immediately attracted to urban ministry. After graduating from Brown University and serving as a youth pastor in Minneapolis, he returned to Philadelphia to found Mission Year, a national service organization which recruits young adults to live and work among the poor in inner-city neighborhoods. Later, the Campolo family spent nearly a decade working at street-level as part of the Walnut Hills Fellowship in Cincinnati, where Bart completed his deconversion. Since moving to Los Angeles in 2014, his work has been focused on inspiring and equipping all kinds of people to build more loving relationships, make things better for others, and cultivate a genuine sense of wonder and gratitude for the improbable privilege of being alive and conscious in the first place. bartcampolo.org