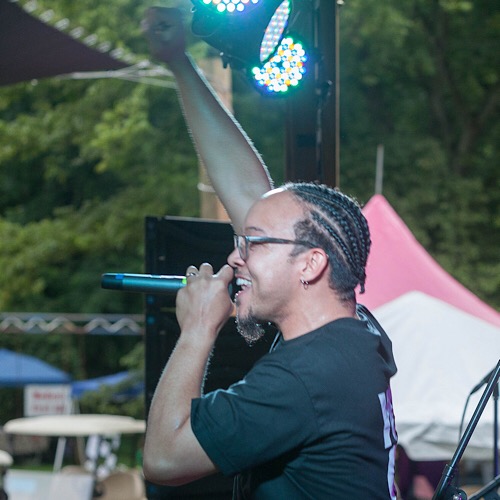 J.Kwest lives in the space between soul music and souls period. As an artist, advocate, and pastor, this Emmy-Award winning Chicago native has used his unique rhythm to tell true stories and defy boundaries.

As a national speaker, advocate and emcee, Julian “J.Kwest” DeShazier has appeared on ABC, CBS, FOX, and Dr. Maya Angelou’s “Oprah & Friends” radio program. J.Kwest is also an Emmy Award-winning musician, featured in the video “Strange Fruit,” a commemoration of the Billie Holiday song and a meditation on racial violence. In 2012 he and his group, Verbal Kwest, appeared in the OXFAM and Bread for the World-produced documentary The Line, providing a critical voice against poverty and violence in the US. The Chicago native and graduate of Morehouse College and the University of Chicago is also pastor of University Church, which most recently worked on a campaign for a trauma center on Chicago’s South Side. J is an adjunct professor at the University of Chicago Divinity School and McCormick Theological Seminary, and is a regular contributor to Sojourners and Huffington Post publications.