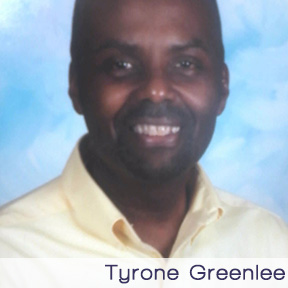 Tyrone Greenlee
Tyrone Greenlee is an Asheville native. He received his undergraduate degree from the University of North Carolina at Chapel Hill. He is a community activist who currently serves on the boards of Just Economics of Western North Carolina, Green Opportunities, and Hands and Feet of Asheville. Tyrone has volunteered for many years with the Building Bridges of Asheville organization. He has formerly served on the boards of The Mediation Center, The Asheville City Schools Foundation, The North Carolina Stage Company, and the Western North Carolina AIDS Project. Tyrone works as a mentor and mediator at the Francine Delany New School for Children Charter School in Asheville. He also serves as the Director of Christians for a United Community, a coalition of churches which has worked to dismantle racism and the disparities caused by racism for over ten years in the Asheville Community. Tyrone is also a member of the New Mount Olive Missionary Baptist Church where he serves as a member of the Deacons, Youth and Music Ministries.

Intersectionality in the Black Church: Strengths and Struggles
The black church is a unique and culturally rich faith community that has served as a source of support and leadership for black people as we battled not just in spiritual warfare but freedom, self-determination, social justice, racial equity, human and civil rights, and coalition building. The western black church began with enslaved faith leaders who learned to read the Bible when it was illegal and harbored secret meetings where the Word served as a source of comfort, hope, and liberation. The black church continued to serve as the common gathering place for revolution and birthed great leaders for civil rights and pioneers of education, arts, music, and politics. The black church is now a diverse compilation of denominations that still leads and serves its community but the modern world has brought intersectionality that the black church is less clear on how to maneuver. This session is a panel format of black faith leaders and those invested in the black church who will explore these intersections as they uniquely impact the future of the black church.