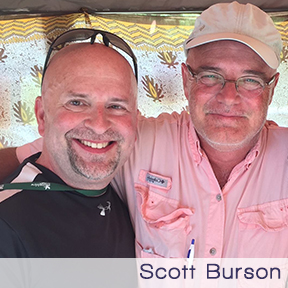 Scott Burson
Dr. Scott R. Burson (Ph.D., Brunel University—London, England) is the Associate Professor of Philosophical Theology at Indiana Wesleyan University, where he teaches courses in philosophy, theology, sports ministry, and C.S. Lewis. His course on C.S. Lewis includes a spring break trip to Oxford and London. Scott is the author of Brian McLaren in Focus: A New Kind of Apologetics (Abilene Christian University Press, 2016), which includes a Foreword by Brian McLaren. Scott’s wife, Deb, created the artwork for the cover of this book, which is available for purchase at this year’s Wild Goose Festival. Scott is also the co-author (with Jerry L. Walls) of Holistic Apologetics (Baker Academic, forthcoming) and C.S. Lewis and Francis Schaeffer: Lessons for a New Century from the Most Influential Apologists of Our Time (InterVarsity Press, 1998). Scott is currently researching the relationship between moral intuition and cognition in the realm of apologetic persuasion.

Brian McLaren and Social Intelligence
In the current cultural climate of “Us vs. Them” opposition and acrimony, Christ-followers must reject polarization and strive for authentic reconciliation. But this is easier said than done. For the past two decades, Brian McLaren has earned international respect for his ability to build bridges in the way and manner of Jesus. In so doing, McLaren has not hidden from controversy or potential conflict, but rather has faithfully displayed a principled pursuit of justice while embodying the key virtues of gentleness, kindness, generosity, and charity. In this session, Dr. Scott Burson, the author of Brian McLaren in Focus: A New Kind of Apologetics (Abilene Christian University Press, 2016), will discuss how McLaren’s skillful employment of social intelligence principles can serve as a model for a charitable and principled form of spirituality.