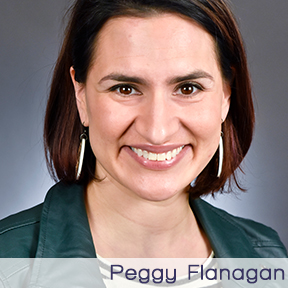 Peggy Flanagan
Peggy Flanagan, a citizen of the White Earth Nation of Ojibwe, is a longtime advocate for Minnesota’s children and families. A noted community and political organizer, she was elected to the Minnesota House of Representatives in November of 2015. Prior to joining the legislature, she served as the executive director of Children’s Defense Fund-Minnesota, an organization dedicated to leveling the playing field for all children in the region. She also worked for eight years at Wellstone Action, first as director and founder of the Native American Leadership Program, then as director of external affairs. As one of the original trainers of Wellstone Action’s signature program Camp Wellstone, she has trained tens of thousands of progressive activists, community and campaign organizers, future candidates, and progressive officeholders to make effective, sustainable, progressive change around the country.

Through God’s Eyes: Seeing American Indians as Contemporary People
The name of Washington, D.C.’s football team is a racial slur that is tolerated and often embraced by people across the country. This is one of the many racist words and images of American Indian people that popular culture promotes every day. This session will explore American Indians as contemporary people and our responsibility as Christians to reject these stereotypes and representations of our Native brothers and sisters.