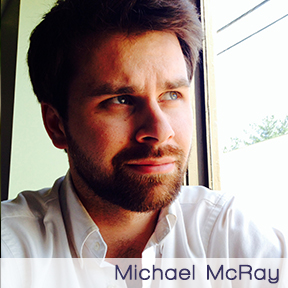 Michael McRay
Michael T. McRay is the author of “Where the River Bends: Considering Forgiveness in the Lives Prisoners” with a foreword by Nobel Peace Prize Laureate Desmond Tutu, and “Letters from ‘Apartheid Street’: A Christian Peacemaker in Occupied Palestine.” He lives in Nashville, TN, where he advocates for vulnerable Tennesseans at the Tennessee Justice Center and adjuncts at Lipscomb University. He is the founder, organizer, and co-host of Tenx9 Nashville Storytelling and the co-founder of No Exceptions Prison Collective. He is currently working on his third book narrating and analyzing his travels through Israel-Palestine, Northern Ireland, and South Africa interviewing over 50 people on their stories and perspectives regarding reconciliation, justice, and forgiveness.

Tenx9 Nashville Storytelling
Tenx9 Nashville (ten by nine) is a Belfast-originated monthly community storytelling night where 9 people have up to ten minutes each to tell a real story from their lives, based around a theme. We have been in Nashville since Sept 2013 and each month covers the gamut of human emotion, allowing all who gather to feel deeply as they listen to strange people telling their strange stories to strangers. It is a chance for real people to stand up and tell their real stories at a wonderful festival focusing on “Story.”

The Story You Hear is True: A Storytelling Workshop
In this two-hour workshop with author, educator, and Tenx9 Storytelling host Michael T. McRay, writers will reflect on the overarching narrative of your life, brainstorm some of your greatest stories (interpret that as you will) through various themes, compare and contrast compelling and mediocre sample stories, and if time permits, peer-review each other’s narratives to provide constructive feedback for story development. Please bring a true personal story of no more than 750 words. These plans are subject to change.