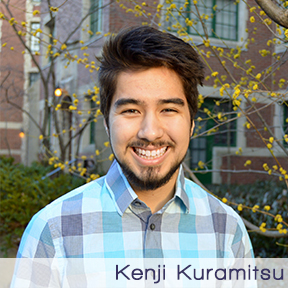 Kenji Kuramitsu
Kenji Kuramitsu is a social worker and Anglican seminarian at McCormick Theological Seminary in Chicago, IL. He is a noted educator on issues of racism, doing theology online, and LGBTQ families. His writing has appeared in the Pacific Citizen, Inheritance Magazine, and Smile Politely Magazine. Kenji currently serves on the National Board of the Japanese American Citizens League, the oldest and largest Asian American civil rights group in the United States, and the Reformation Project, a Christian direct action organization engaging the Church on LGBTQ advocacy. Connect with him on Twitter @afreshmind.

Oriented to Love: Intentional dialogue about sexual/gender diversity in the faith community
Join us for a moderated fishbowl conversation with Jesus-followers of various sexual/gender orientations and theological convictions. What kinds of questions generate the best dialogue? How can people who disagree on what faithful sexuality is enjoy unity within the body of Christ? What does it look like to listen with love? How can we connect across deep differences without leaving our convictions at the door?

Breaking Binaries: God-talk from Liminal Spaces
In this workshop, Hebrew Bible scholar and trans YouTuber Austen Hartke and Japanese American liturgist Kenji Kuramitsu will share their own stories of liminality along the lines of race, gender, and sexuality, uplifting relevant characters from across the witness of church and scripture throughout. This will be a &quot;mixed-methods&quot; workshop encouraging participants who inhabit borderlands, “middle-identity”; spaces in/between dominant psychic ways of being to explore and voice their own valid social locations – and to utilize their own stories as a point of departure for creating healing theology from positions of liminality.

America’s Original Sin- A Town Hall on Race in America
America was founded by the near genocide of one people and the enslavement of another. Since that foundation, the United States has never confronted the racialized structures and systems put in place at the outset. Now in a few decades the United States will be, for the first time in its history, a majority of minorities. This fact is underneath much of the political rhetoric and discourse we now see. This town hall discussion will look at that realty and how white Christians have to become more Christian than white.

Race, Myth, and Being Made In The Image of God (in the youth tent)
We lose something unique to our humanity when another’s dignity is marred through racism and bigotry. Using the book of Genesis, Kenji Kuramitsu will guide the youth in talking about the sacredness of each person and myth to then explore the idea of reclaiming our proud origins from the myth of white supremacy. Every person comes from a glorious heritage and struggling history, including youth raised to believe they are just “white”. Time will be spent speaking about national origins and familial histories as a myth-busting practice for addressing white supremacy and race-based bigotry.

HuanDao- The Journey of Asian American Identity Through Personal Narrative
When faced with the reality of persistent erasure of Asian American narratives, SueAnn Shiah was convicted to document her 500+ mile bicycle trip of the island of Taiwan. Along the journey and through the filmmaking process, she was confronted by the realities of a family and cultural history riddled with war, colonialism, and diaspora. These, combined with the ever present tensions of bicultural identity, ask questions not only of what it means to be Taiwanese but what it means to be American? Filmmaker SueAnn Shiah will be joined by Kenji Kuramitsu and Soong-Chan Rah in discussing the film, its intersection with their own stories, and what is “Asian American” identity.