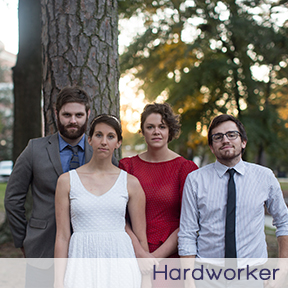 Hardworker
Hardworker brings banjo and guitar and sweet harmonies, singing songs of heartbreak and home, but these are mixed up with the concerns of the incarcerated, the exile of the refugee, the voice of the silenced, and the insanity of belief. For Wild Goose, songwriters Sus Long and Michael Conner leave some of the bar tunes at home and share their musical wonderings about the worldly powers and principalities and the place of today’s psalmist. Hardworker’s subject matter is informed by novels and poems, morning news, late-night theology, and the stories of the people around them. The two friends kept making friends with musical friends and this folk-rock band has grown to include guitarist Danny Nowell and singer Alex Treyz. Hardworker’s first EP, The Awful Rowing, is a collection of five songs written by Long and recorded with Conner and Treyz by David Wimbish (The Collection). The song “Darkroom Lullaby” received an honorable mention in American Songwriter’s May/June 2015 issue.