Search by Co-Creator, Experience, or Venue. Once you open a page, you can browse page by page by using the arrows or arrow keys on a computer.
Schedule is subject to change at any time. 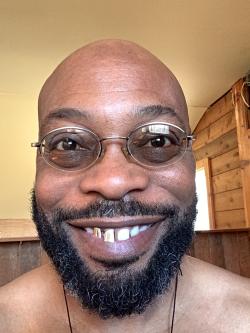 His Sacred Humanness (HSH) Heiwa no Bushi is a Buddhist-Christian monk and Abbot of the Thomasville Buddhist Center in Thomasville, North Carolina. He is a former Christian minister, having served in the Christian denominations of Southern Baptist, Missionary Baptist, African Methodist Episcopal Zion, and Church of God (Anderson, IN). He has advanced degrees in philosophy and systematic theology. He also received training in both Mahayana and Daishin Zen Buddhism. As a physical specimen, Bushi holds black belts in three different Japanese martial art forms, making him, as friends often say, an “official badass.” Heiwa no Bushi places his teachings under the moniker of “BodhiChristo,” which means “enlightened Christ,” an amalgamation of the two rich streams of Buddhism and Christianity. Here he describes the arc of his journey until the present.