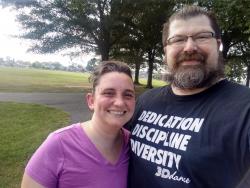 April and Tim Trussell-Smith have been married for fifteen years. Together they have two daughters, three cats and a puppy. April is a Unitarian Universalist who considers herself both a non-theistic humanist and still claims her Baptist heritage. She is an active lay leader in her UU congregation. Tim grew up non-religious but is now an ordained minister in the Christian Church (Disciples of Christ). Once in seminary, he described himself as an Episco-Baptist UU and it's still complicated.