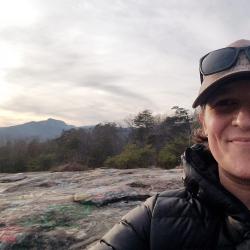 Paula Rainey Benson is a singer/songwriter, visual artist, and homeschooling mom based in Weaverville, NC. Originally from Greenville, SC, Paula earned her BA in studio art from Columbia College in Columbia, SC with a concentration in printmaking. She later earned her MFA in studio art at Radford University in Radford, VA with a concentration in painting and photography. Paula has been playing guitar since the late 1990's and began writing songs in the early 2000's. After a decade-long hiatus from writing and performing, Paula has been playing in the Asheville/Greenville area for the past several years. Her songs often highlight the struggle to find peace in the presence of God, yet do not fall into typical Christian music categories.