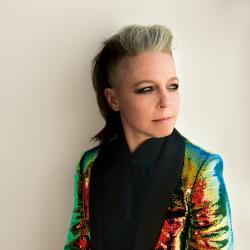 ERIN MCKEOWN (Music & Lyrics, Co-Orchestrations) is a musician, writer, and producer who has released 10 albums since her 2000 debut, Distillation. As a bandleader, she has performed at Bonnaroo, Glastonbury, and Newport Folk Festivals. McKeown’s songs are a familiar presence on NPR and the BBC and have appeared in commercials, film, and television. A graduate of Brown, Erin has been a resident artist at Providence, RI’s AS220, a 2011 fellow at Harvard’s Berkman-Klein Center, and the recipient of a 2016 writing fellowship from The Studios of Key West. Her first musical, Miss You Like Hell, opened Off-Broadway at The Public Theater in 2018, where it was nominated for 5 Drama Desk Awards, including Best Lyrics, Best Music and Best Orchestrations, and The Wall Street Journal named it Best Musical of 2018.