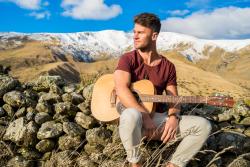 Ciaran McMeeken is a dynamic, lively singer- songwriter from New Zealand with a wonderful ability to connect, engage and take his audience on a journey from ecstatic dancing through to hand-holding teary eyed swaying with strangers. With a great array of timeless songs, an infectious energy and a heart of gold, Ciaran is definitely one to get in the front row for. Ciaran has opened for mega stars like Ronan Keating & Andy Grammer and has toured extensively through NZ on his ‘Debut Album Tour’ & ‘Which Way Shall We Go?’ 2018 Summer Tour. He has played to sold-out rooms, arenas, intimate house concerts, as well as playing some of New Zealands biggest festivals including ‘Homegrown’ and ‘Biophilia’. Ciaran has achieved incredible mainstream radio success in New Zealand with his songs ‘City’, ‘Which Way Shall We Go?’, ‘That Feeling’, ‘Pure Intentions’ & ‘This Time Tomorrow’ all gaining extensive plays on the major stations. Ciaran’s songs have a combined total of nearly 7 million streams on Spotify.