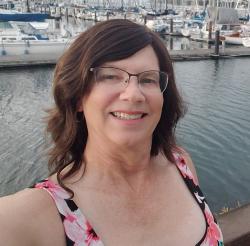 Ceri Anne is a Christian Transgender Woman, and parent of two adult kids, Kevin and Kaitlin. Ceri (pronounced Carrie) lives on a sailboat in Oriental, NC, after moving from Kansas City last year, but was raised in Minnesota, Montana, and North Dakota. As a Navy Veteran she has been stationed in Norfolk, VA, San Diego, CA, Pensacola, and Key West, FL. Ceri grew up in a family of Evangelical Ministers. In the process of reconciling her faith with being transgender, she was called to help others struggling with the suffering the church has been causing LGBT people. She currently attends UMC Church of the Resurrection, and is a graduate of the 2017 Reformation Project Leadership Cohort. She has presented at The Reformation Project, Q Christian Fellowship, and Gender Odyssey. Professionally, Ceri has worked in photography her whole life, beginning with newspapers, then naval intelligence, studio, dance and theater. She’s been in the technical, photo science side of photography for the last 30 years. She has a long history working as a Scout, and Church Youth Leader, having led many youth missions to Mexico. Her passions include travel, music, sailing, and the outdoors.