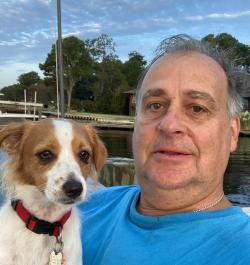 Brad is a 60+ year-old white cis-gender male who got a good deal of the cards and lived most of his life coloring between the lines (CBTL). CBTL meant school, more school and then a career path that took him from corporate America to the non-profit world (HfH) to a business start-up that currently limps along. It included getting and staying married, raising children (who are now raising their own children) buying a house, paying taxes, tending to the lawn, moving several times, attending church, volunteering on some boards all while trying to eat right. And all while trying to see the glass as half full. While still generally optimistic, Brad has become acutely interested in the joy of living. Particularly in a time when there is so much personal pain and suffering. This led to the creation of a model for living each day that he calls The Joy of Pie. Think of slices of this Pie as those parts of life that bring you joy. While creating Pie solely for himself, others asked him to share the model/tool. So that's what he’s offering as a nine-time attendee and first time presenter at the Goose.