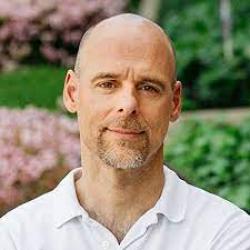 Bart Campolo is a speaker, writer and counselor who also serves as the Executive Director of Caravan, a humanizing community in Cincinnati, Ohio. Born and raised in suburban Philadelphia, Bart became an evangelical Christian as a teenager and was immediately attracted to inner-city ministry. In the process of becoming an influential evangelical leader, however, Bart increasingly questioned his own faith. In 2011, after returning to street-level community building in Cincinnati, he finally completed his gradual transition from Christianity to secular humanism. He later spent three years in Los Angeles as the first humanist chaplain at the University of Southern California, returning to Cincinnati in 2018 to help found Caravan, go back to school and launch his counseling practice. Bart also hosts the popular Humanize Me podcast, and he and his famous father, Tony Campolo, were the subjects of John Wright's documentary film, Leaving My Father's Faith.