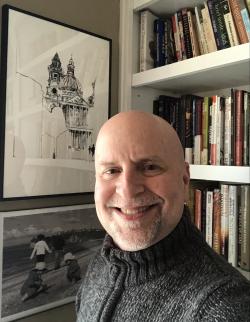 Dr. Scott R. Burson (Ph.D, Brunel University—London, England) is Professor of Philosophical Theology at Indiana Wesleyan University and the author of the new book: All about the Bass: Searching for Treble in the Midst of a Pounding Culture War (Cascade, 2021). The seeds for All about the Bass were planted on Valentine’s Day 2017 when Dr. Scott Burson gave a talk at Indiana Wesleyan University's first Day of Courageous Conversations. He was humbled by the positive feedback from many students and colleagues, including Professor of Music Phoenix Park-Kim who wrote the following on social media: So grateful today for the IWU community engaging in the Courageous Conversations. There are just too many excellent sessions to attend, but if you can't make up your mind for the afternoon sessions, I highly encourage you to attend Scott Burson's session titled 'All about the Bass.' (Hint: It's not about the song). Following this initial presentation, Dr. Burson proceeded to integrate the All about the Bass content into his Humanities Philosophy course. Central to this material is a Matthew 5 “love your enemy” assignment. The first part asks students to identify their “other”—the kind of person they find difficult to understand across a moral/social/cultural divide. Throughout the semester, students then learn 10 action steps (treble tactics) designed to help them become a more compassionate Christian without sacrificing their convictions. At the end of the semester, students conclude the “love your enemy” assignment by writing a paper on how they will try to build a bridge to their “other” moving forward. While students rarely change their convictions, most move from incivility to increased emotional and cognitive empathy. Dr. Burson has found the “All about the Bass/Love Your Enemy” material to be the most impactful and transformative content that he has taught during his career as a professor. One of the most meaningful comments about the All about the Bass material came from a student named Mason, who navigates the world in a wheelchair. Mason is one of the most positive persons you could ever meet. In fact, he travels far and wide as a popular motivational speaker. A few years ago he even addressed the Indiana House of Representatives. After taking Dr. Burson’s Humanities Philosophy course, Mason wrote: “Dr. Burson’s ‘All about the Bass’ content is the best I have ever seen and worked through throughout my educational career thus far. As a communicator, I admire how Dr. Burson came up with the content because I know how hard coming up with fresh new ideas can be. I do not know if Dr. Burson has done so already, but I would encourage him to travel the world to share this content.” Dr. Burson, who is also the author of Brian McLaren in Focus (Abilene Christian University Press, 2016), previously spoke at the 2016 Wild Goose Festival on the Social Intelligence of Brian McLaren. He is also the co-author of C.S. Lewis and Francis Schaeffer: Lessons for a New Century from the Most Influential Apologists of Our Time (InterVarsity Press, 1998).