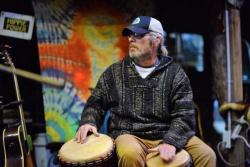 Gene Anderson is a preacher, a poet, and a percussionist. He is an ordained PC(USA) minister but has been considered inactive since resigning his first pastorate less than a year after being diagnosed and treated for Type I Bipolar Disorder. Before attending college and seminary in his mid 30s and early 40s, he dropped out of high school, served in the US Army, and then hitchhiked across the United States ending up in Arizona where he worked the fields and ultimately entered the restaurant business as a dishwasher and cook, a job he did for about 15 years. Gene has lived a variety of places and seen a variety of things, such as living in a single room occupancy dwelling in San Francisco's Tenderloin District in 1995-1996 as well as attending elite colleges and graduate schools in the years afterwards. Since leaving active professional ministry he has spent time as a schoolteacher, a musician, and as a dishwasher. Gene runs obstacle course races and off road triathlons, took a 66 day, 17,000+ mile road trip around the USA in 2020, and thinks that cheesecake should be considered a major food group.